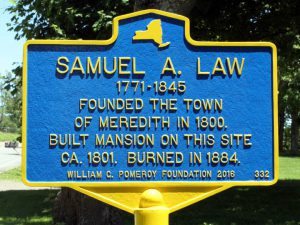 In June 2017, Meredith Historical Society installed a New York State historical marker at Meredith Square commemorating Samuel A. Law’s founding the town of Meredith in 1800.  The marker was installed at  the site of the mansion Law built circa 1801.  The mansion burned in 1884 and Frances W. Ayer’s summer home, Ayrmont, was built on the site.  Ayrmont was converted to the second Meredith Inn in 1923. The marker was funded by a grant from the William Pomeroy Foundation.